A parting amalgamation of scattered works, Roger Angell’s This Old Man is a moving recount of leftover works somber and jubilant alike. A year before his hundredth birthday, Angell strings sketches, literary criticism, librettos, and essays into the heralded book. 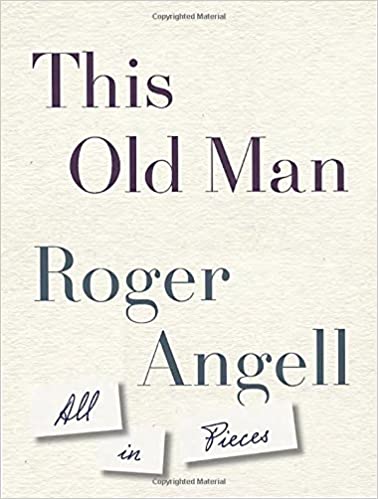 Long known for his range and supple prose (he is the only writer elected to membership in both the Baseball Hall of Fame and the American Academy of Arts and Letters), Angell won the 2015 American Society of Magazine Editors’ Best Essay award for “This Old Man,” which forms a centerpiece for this book. This deeply personal account is a survey of the limitations and discoveries of great age, with abundant life, poignant loss, jokes, retrieved moments, and fresh love, set down in an informal and moving fashion. A flood of readers from different generations have discovered and shared this classic piece. The book gathers essays, letters, light verse, book reviews, Talk of the Town stories, farewells, haikus, profiles, Christmas greetings, and late thoughts on the costs of war. Whether it’s a Fourth of July in rural Maine, a beloved British author at work, Derek Jeter’s departure, the final game of the 2014 World Series, an all-dog opera, editorial exchanges with John Updike, or a letter to a son, what links the pieces is the author’s perceptions and humor, his utter absence of self-pity, and his appreciation of friends and colleagues—writers, ballplayers, editors, artists—encountered over the course of a full and generous life. --Goodreads

This Old Man is as profound a meditation on time and loss as some of the work of Angell's revered stepfather, E.B. White.... As Angell tells it straight, it's not much of a pleasure to be very old, but it is a great pleasure to spend time in the company of This Old Man. —NPR Fresh Air