Hi Blues! Welcome to the blurb where I tell you a little about the summer reading book that I will be leading discussions about! Reading Lolita in Tehran: A Memoir in Books is a book that takes place in Iran. It is about a teacher, Azar Nafisi, who, once a week, meets up with seven of her female students to secretly read forbidden books. This book celebrates "the liberating power of literature" while intertwining the story of young Iranian girls and that of Western classics. I hope to discuss this book with you guys! Email me if you have any questions about the book!

Reading Lolita in Tehran: A Memoir in Books
by Azar Nafisi 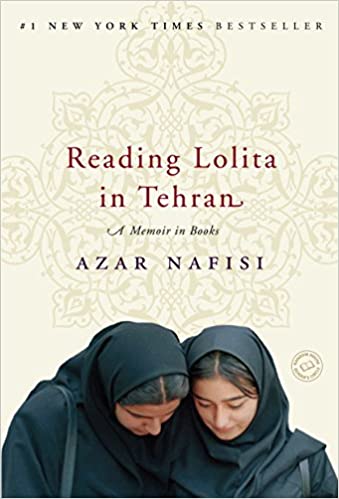 ​Every Thursday morning for two years in the Islamic Republic of Iran, Azar Nafisi, a bold and inspired teacher, secretly gathered seven of her most committed female students to read forbidden Western classics. Some came from conservative and religious families, others were progressive and secular; some had spent time in jail. They were shy and uncomfortable at first, unaccustomed to being asked to speak their minds, but soon they removed their veils and began to speak more freely–their stories intertwining with the novels they were reading by Jane Austen, F. Scott Fitzgerald, Henry James, and Vladimir Nabokov. As Islamic morality squads staged arbitrary raids in Tehran, as fundamentalists seized hold of the universities and a blind censor stifled artistic expression, the women in Nafisi’s living room spoke not only of the books they were reading but also about themselves, their dreams and disappointments.

Azar Nafisi’s luminous masterwork gives us a rare glimpse, from the inside, of women’s lives in revolutionary Iran. Reading Lolita in Tehran is a work of great passion and poetic beauty, a remarkable exploration of resilience in the face of tyranny, and a celebration of the liberating power of literature.- Goodreads

“Transcends categorization as memoir, literary criticism or social history, though it is superb as all three . . . Nafisi has produced an original work on the relationship between life and literature." –Publishers Weekly (starred review)