Summer Reading 2020: ◦ The Making of the Atomic Bomb

Here's why Riley chose The Making of the Atomic Bomb...

Humankind unleashes the power of the atom! Wild! What's even more wild? The human stories, political histories, and physical (as in: PHYSICS) realities that intersected in the sprawling project to create a CHAIN REACTION. Read this book if you are interested in: physics (you don't have to be a scientist!), physicists (Bohr is a master ping-pong player, among other things), leadership (who in the US government even knew about this?), nuclear piles (?), military history, intellectual history, explosives, commando raids, Einstein, Bhagavad Gita, other.

The Making of the Atomic Bomb 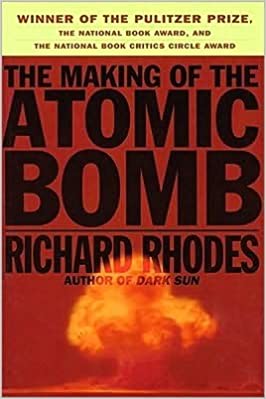 Here for the first time, in rich, human, political, and scientific detail, is the complete story of how the bomb was developed, from the turn-of-the-century discovery of the vast energy locked inside the atom to the dropping of the first bombs on Japan. Few great discoveries have evolved so swiftly -- or have been so misunderstood. From the theoretical discussions of nuclear energy to the bright glare of Trinity, there was a span of hardly more than twenty-five years. What began as merely an interesting speculative problem in physics grew into the Manhattan Project, and then into the Bomb with frightening rapidity, while scientists known only to their peers -- Szilard, Teller, Oppenheimer, Bohr, Meitner, Fermi, Lawrence, and yon Neumann -- stepped from their ivory towers into the limelight. Richard Rhodes takes us on that journey step by step, minute by minute, and gives us the definitive story of man's most awesome discovery and invention. - Goodreads

"The best, the richest, and the deepest description of the development of physics in the first half of this century that I have yet read, and it is certainly the most enjoyable." --Isaac Asimov

A short doc on the atom bomb

In the past, Riley has recommended the following books: