Summer Reading 2019: Would You Kill the Fat Man

Here's why John suggests Would You Kill the Fat Man...

This book offers a series of ethical dilemmas revolving around a runaway train heading toward people tied to the track. What would you do in each situation? What if you could save some of them, but that would cause the death of others? This intriguing book uses each dilemma to introduce a different school of philosophical thought, and a different way of viewing the problem. Reading it led me to question some of my basic assumptions about morality. I hope you'll find it as compelling as I did!

Would You Kill the Fat Man?: The Trolley Problem and What Your Answer Tells Us about Right and Wrong 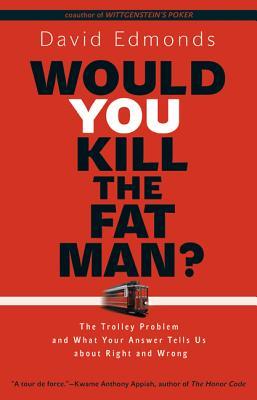 Edmonds offers an accessible, humorous examination of how people approach complex ethical dilemmas. The “trolley problem” is a scenario in which, to save five people from an oncoming trolley, one must sacrifice another person. In the majority of these philosophical puzzles, the titular fat man must die at your hands (by being pushed off the bridge) to save several lives. This experiment tests people’s ethical decision making and interpretations of the results generally fall into two broad camps. Utilitarianism suggests that choices should be made based on how much pleasure they produce and pain they avoid. The other, deontology, argues that people should never use others as a “means to an end.” Here, Edmonds includes similar real-world situations, such as the  1894 Pullman strike, and a “ticking clock” German kidnapping case. Written for general readers, the book captures the complexities underpinning difficult decisions. - Publishers Weekly