Here's why Charisse suggests The Bond...

I'm excited to read The Bond because the author, Robin Kirk, is a well-known journalist, professor and human rights advocate. Based off her work in Cambodia, Latin America, Rwanda and Yugoslavia, she investigates why people commit genocidal acts in a YA-novel set in a dystopian future.

The Bond: A Novel 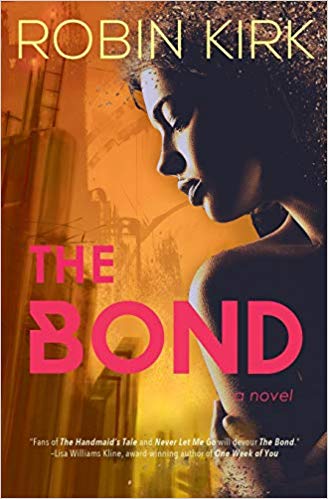 If you had to choose who would sacrifice her life for you, could you?

Dinitra believes the Sower who engineered her made a mistake. She only finds joy after she's drafted into the Legion to train a mutant battle dog called 12. Dinitra and 12 will help in the final battle for their home, the Weave. They’ll destroy the rebels who stand in the way of the Weave’s ultimate goal: a world without males.

In a surprise attack, rebels kidnap Dinitra and 12. She learns that rebels also engineer children, but they make males, lots of them, to topple the Weave. All of her beliefs are challenged as she learns the ugly secrets the Weave has kept from most of its citizens. Worse, Dinitra feels attraction to one male warrior—a shameful crime in both societies, where only wild beasts mate.

As war approaches, Dinitra must make an agonizing decision as she learns what love and loyalty mean in a world of engineered humans and not-so-monstrous mutants, while war threatens them all.

In the author's words