Here's why Brooke S. suggests The Woman Who Smashed Codes...

Over the past few years, I have grown fond of reading true stories about the amazing feats of humanity, and this book certainly piqued my interest.  It follows a young female codebreaker through World War One and World War Two as she overcomes inequality, breaks barriers, and works alongside her husband as they master the two main codes used in WWII - Purple and Enigma. If you like codes, riddles, and girl power, you will love this book!

The Woman Who Smashed Codes: A True Story of Love, Spies, and the Unlikely Heroine who Outwitted America's Enemies 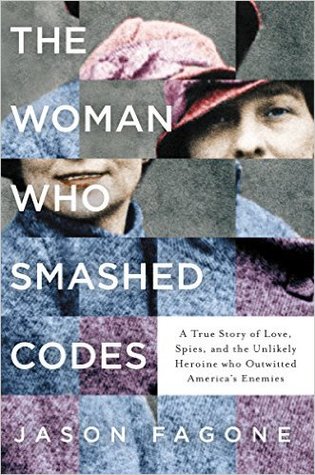 Two forces set Elizebeth Friedman on the path to success: her love of literature and her fear of being ordinary. The first led her to the Newberry Library in Chicago to see a rare copy of William Shakespeare's First Folio. There, a librarian introduced her to a rich, eccentric stranger named George Fabayan. Against her sound judgment, Friedman accepted an unusual assignment at Fabayan's laboratory of decrypting Shakespeare's works. Friedman met her husband, William, at the laboratory and they eventually became two of the world's top cryptologists. William and Elizebeth solved some of the toughest crimes and military intelligence challenges of the  20th century. Fagone, an editor for the Huffington Post Highline, records the pair's accomplishments, trials, and love affair, taking care to ensure that Elizebeth finally receives the recognition she deserves. The impressive end notes will prove useful to researchers who wish to further explore the contributions of female codebreakers. VERDICT Fans of Margot Lee Shetterly's Hidden Figures and Andrew Hodges's Alan Turing: The  Enigma will enjoy this carefully researched story of a smart and loyal but overlooked woman. - Library Journal