Why Katherine and Yosi picked Evicted

After spending a year with Urban’s Housing Rights Group educating ourselves about America’s history of housing inequality, we chose to sponsor Evicted by Matthew Desmond. Evicted offers a unique perspective of one of the most pressing topics confronting many Americans today. When we see families pushed into tents, cramped apartments, or increasingly violent communities, we see the human cost of America’s growing inequality—as well as people’s resilience and intellect in the face of adversity. Evictions were never uncommon in America, except in the most desolate parts of American cities, yet today, it has become painfully frequent. Many would argue housing should be a human right for everyone, yet we’re sure most of you have come into contact with someone who has not had a place to call home. This is an issue everyone should be aware of and educated about, which is why we’re hoping many of you will join us in learning about and fighting housing inequality! 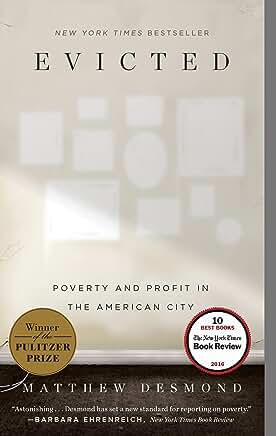 In Evicted, Princeton sociologist and MacArthur "Genius" Matthew Desmond follows eight families in Milwaukee as they struggle to keep a roof over their heads. Evicted transforms our understanding of poverty and economic exploitation while providing fresh ideas for solving one of 21st-century America's most devastating problems. Its unforgettable scenes of hope and loss remind us of the centrality of home, without which nothing else is possible. - Goodreads

[Check out the short video below!]