Summer Reading 2021: Sharks in the Time of Saviors

Why Andy picked Sharks in the Time of Saviors

Sharks in The Time of Saviors is the first novel by Hawaiian-born author, Kawai Strong Washburn. The novel follows the Flores family both in their lives on the island and as their children grow up and leave for the mainland. A contemporary hero’s journey interwoven with magical realism, Hawaiian lore and familial and coming of age issues, their saga is relatable, transporting the reader into both known and unknown, unseen realms of being.

I easily fell into this gripping and beautiful story. I learned so much about both Hawaiian legend and issues facing modern Hawaiian families. I came to care for the characters— their experiences woven together by familial bonds, ties to their island and the call of the mainland in our modern day world. It is a beautiful and harrowing tale brought to life by Washburn’s lyrical imagery and his characters’ relatable voices.

About Sharks in the Time of Saviors

Sharks in the Time of Saviors 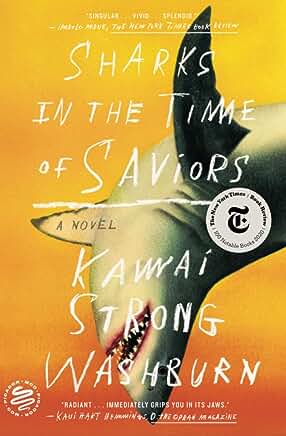 In 1995 Kailua-Kona, Hawaii, on a rare family vacation, seven-year-old Nainoa Flores falls overboard a cruise ship into the Pacific Ocean. When a shiver of sharks appears in the water, everyone fears for the worst. But instead, Noa is gingerly delivered to his mother in the jaws of a shark, marking his story as the stuff of legends.

Nainoa's family, struggling amidst the collapse of the sugarcane industry, hails his rescue as a sign of favor from ancient Hawaiian gods - a belief that appears validated after he exhibits puzzling new abilities. But as time passes, this supposed divine favor begins to drive the family apart: Nainoa, working now as a paramedic on the streets of Portland, struggles to fathom the full measure of his expanding abilities; further north in Washington, his older brother Dean hurtles into the world of elite college athletics, obsessed with wealth and fame; while in California, risk-obsessed younger sister Kaui navigates an unforgiving academic workload in an attempt to forge her independence from the family's legacy.

When supernatural events revisit the Flores family in Hawaii - with tragic consequences - they are all forced to reckon with the bonds of family, the meaning of heritage, and the cost of survival. - Goodreads

[Check out an interview with the author below!]