If you live to eat rather than eat to live, this is the book for you! 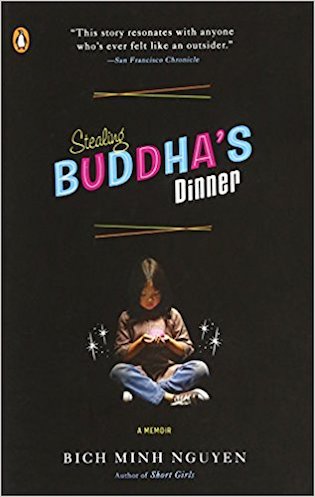 A vivid, funny, and viscerally powerful memoir about childhood, assimilation, food, and growing up in the 1980s
As a Vietnamese girl coming of age in Grand Rapids, Michigan, Bich Nguyen is filled with a rapacious hunger for American identity. In the pre-PC era Midwest, where the devoutly Christian blond-haired, blue-eyed Jennifers and Tiffanys reign supreme, Nguyen's barely conscious desire to belong transmutes into a passion for American food. More exotic seeming than her Buddhist grandmother's traditional specialties?spring rolls, delicate pancakes stuffed with meats, fried shrimp cakes?the campy, preservative-filled ?delicacies? of mainstream America capture her imagination. And in this remarkable book, the glossy branded allure of such American foods as Pringles, Kit Kats, and Toll House cookies become an ingenious metaphor for her struggle to fit in, to become a ?real? American. Beginning with Nguyen's family's harrowing migration from Saigon in 1975, "Stealing Buddha's Dinner" is nostalgic and candid, deeply satisfying and minutely observed, and stands as a unique vision of the immigrant experience and a lyrical ode to how identity is often shaped by the things we long for. --Goodreads.com