Here's why Geoff suggests The Left Hand of Darkness...

You'll find no space battles, light sabers, or alien beasts in this science fiction novel. Instead, LeGuin smartly explores ideas as diverse as friendship, trust, and gender fluidity in this acclaimed book. Honor her passing earlier this year by reading this with me (and please, help me figure out the significance of the title).

The Left Hand of Darkness 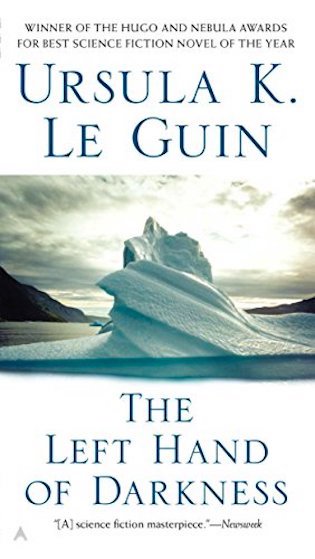 A groundbreaking work of science fiction, The Left Hand of Darkness tells the story of a lone human emissary to Winter, an alien world whose inhabitants can choose -and change - their gender. His goal is to facilitate Winter's inclusion in a growing intergalactic civilization. But to do so he must bridge the gulf between his own views and those of the completely dissimilar culture that he encounters.
Embracing the aspects of psychology, society, and human emotion on an alien world, The Left Hand of Darkness stands as a landmark achievement in the annals of intellectual science fiction. --Goodreads.com

“Stellar...A triumphant return to the magic-drenched world of Earthsea...Le Guin is still at the height of her powers, a superb stylist with a knack for creating characters who are both wise and deeply humane. A major event in fantasy literature.”—Publishers Weekly (starred review)

“No single work did more to upend the genre’s conventions than The Left Hand of Darkness.” —The Paris Review